Skip to content
A 360º Guide To Spain's Most Dangerous Path

If you enjoy a hike in the sunshine and don’t have a fear of heights then this is the perfect place for you. I’d heard about Spain’s most dangerous path, so while staying with friends in Villanueva del Rosario for a long weekends climbing trip, I couldn’t miss out on the opportunity to go and check it out. It’s definitely one for the Bucket List.

Even the drive there from Villanueva del Rosario was picturesque in itself, taking us through some interesting non touristy towns and villages. We stopped off overlooking the top of Antequera and I took a quick pic.

Driving into the valley to the parking area there are some great views and we did stop on a number of occasions to take photos. On arriving at the southern entrance car park where there are a couple of shops for snacks and ice cream, you got to have an ice cream. You’ll also want to use the restrooms here as there are no facilities along the entire length of the route. Using a bush would be risky, lots of people around and not many bushes for that matter. The bus will take around 20 minutes to get you as close as it can get to the northern entrance where there is a bar called El Kiosko, you can grab yourself a bite to eat here if you haven’t done already.

The Most Arduous Part

From here it’s a 2.7km hike through an uneven woodland and a stroll alongside the river to reach the North Entrance and the official start of the Caminito del Rey. This was probably the most arduous part of the entire walk, which says a lot for Spain’s most dangerous walk. There is a shorter approach to, I’ve pinpointed it on the map below.

When you finally arrive at the north gate they give everyone compulsory helmets and hair nets (sexy times) You’ll be made to wait while a group of around 50 or so people gather before they let anyone enter. This is your last chance to grab a bottle of water from the vending machine, if you forgot any. SomeÂ people will have paid for the guided tour, which is only a slight jump in price, but you don’t need to. Once they let you through the gate you walk through a tunnel, after this the crowds will soon spread out and disperse. 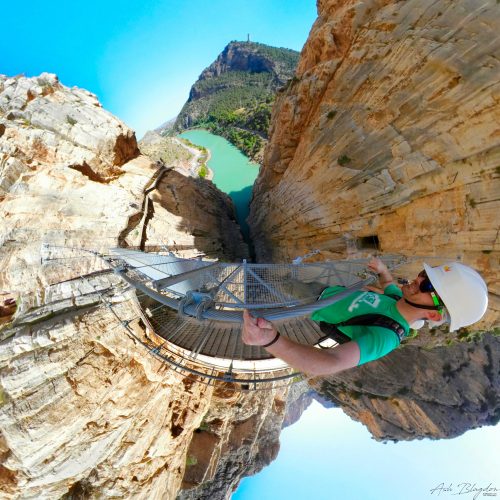 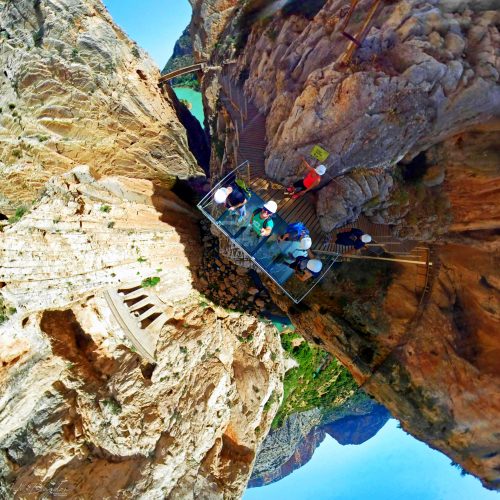 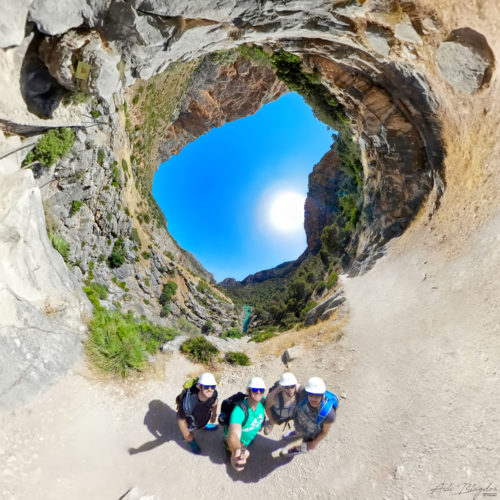 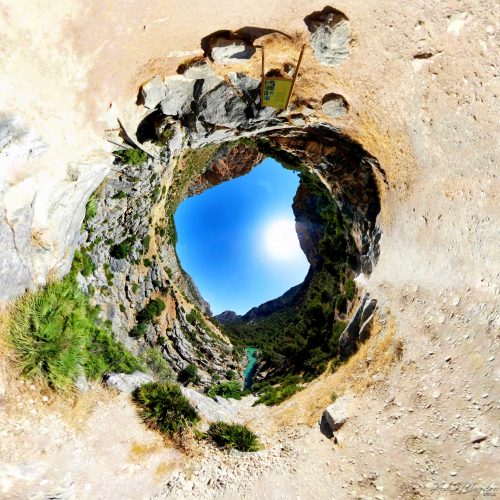 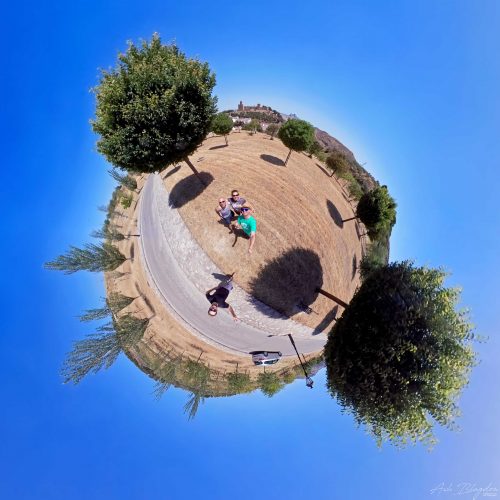 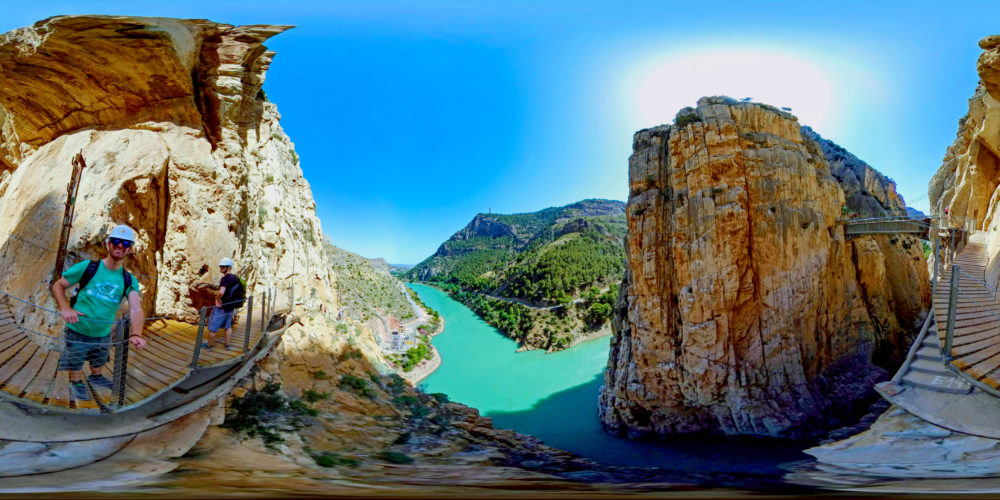 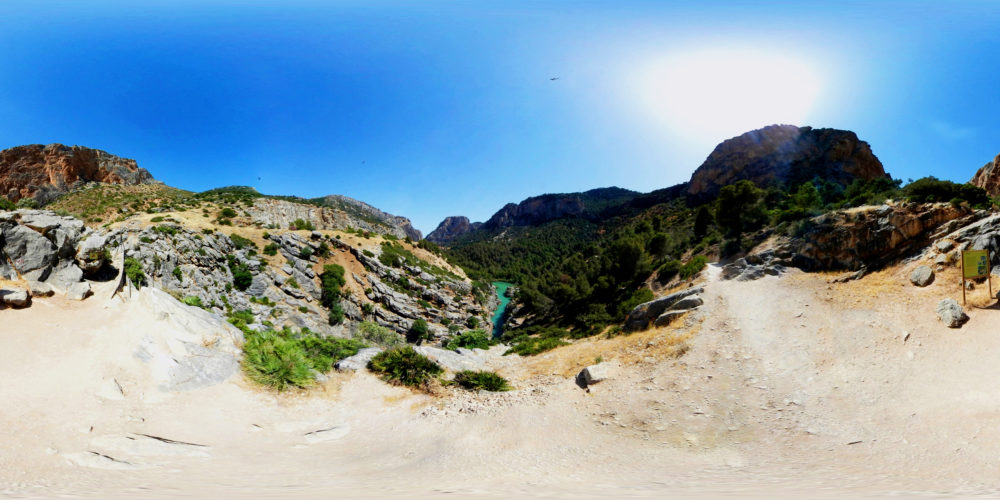 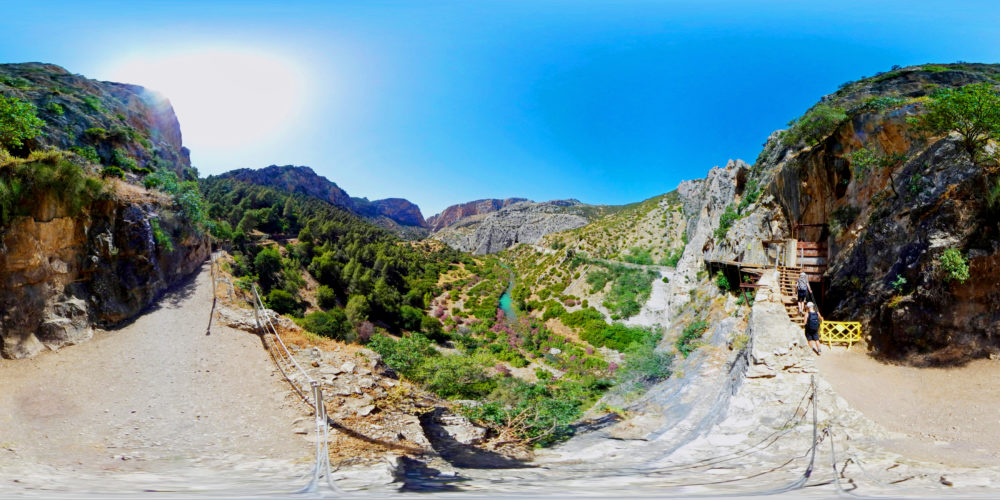 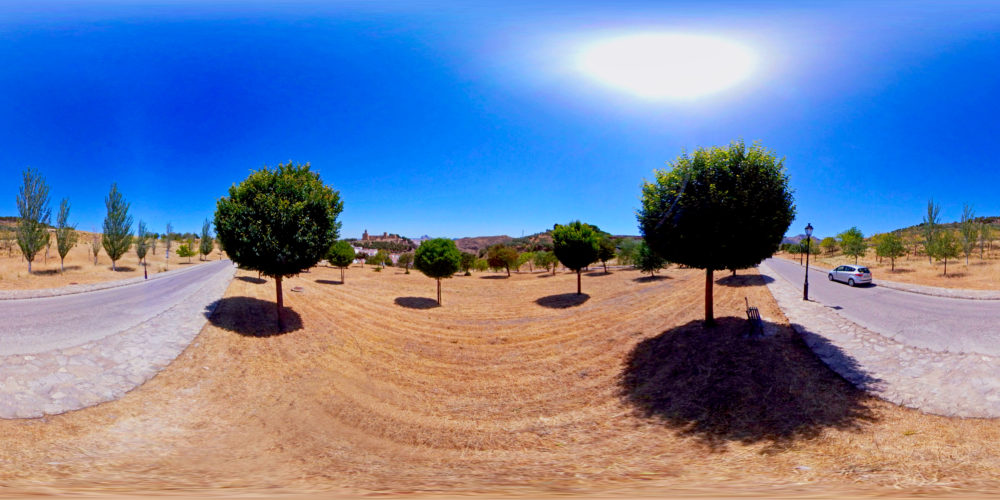 360 photos are available to purchase here.
or watermarked at half price here.

Downhill All the Way

If like us you choose to go around midday, which seemed to be a popular time, then remember don’t forget that sunscreen and take plenty of water with you as it can get pretty hot. The route does have some undulating paths and a fair few steps, but there’s nothing strenuous at all and it’s pretty much downhill all the way. However if you’re really scared of heights, I would suggest you sit this one out.

I was very glad that we had parked at the end of the route, because the legs could do with a break at this point. Having to go all the way back to the north gate would of sucked. There’s a couple bars at the top of the hill near the train station with a nice cold beer and some tapas lying in wait for you to demolish after the appetite you’ve just built up.

One of the Most Beautiful Scenic Hikes

If you’re in the area then this is not to be missed and is definitely one for the Bucket List. With the stunning views and sheer drops makes it without a doubt one of the most beautiful scenic hikes I have been on. Â It was once renowned to be the most dangerous, but is now completely safe. Anyone of any age can enjoy this route. We completed it in less than 2 hours and we took our time, taking lots of photos along the way.

Caminito del Rey is in one of the most beautiful scenic spots in the Malaga Mountains of El Chorro. Known as the most dangerous path in the world. In 1999 the Caminito del Rey (The King’s Little Pathway) was closed for over a decade. It has been known in the past as the “world’s most dangerous walkway” following five deaths in 1999 and 2000. It remained closed until 2015 after refurbishments were completed and the hike is open to the public once more and is now a lot safer. The walkway is 1 metre (3 ft) in width, and rises over 100 metres (330 ft) above the river below. The total length you’ll be hiking is 7.7km. The 2.7km to reach the starting point, then the 3.5km of Caminito del Rey and once you’ve reached the end it’s a further 1.5km to get back to the car.

The hike is one way, you have to start at the north entrance and finishing at the south gate. The entire hike should take you around 2-3 hours.

The walkway was built to provide workers at the hydroelectric power plants at Chorro Falls and Gaitanejo Falls with means to cross between them, to provide transport of materials, and to facilitate inspection and maintenance of the channel. Construction began in 1901 and was finished in 1905. King Alfonso XIII crossed the walkway in 1921 for the inauguration of the dam Conde del Guadalhorce and it became known by its present name.

From the south you can buy a bus ticket for €1.55 and join the que for the bus that comes every 30 minutes. There are actually two approaches to reach the start, If you have any difficulty with walking there is a shorter approach, 1.5km through a small lit tunnel which is just 200m down the road from El Kiosko and should take only 20 minutes or so. Starting from El Kiosko is a 2.7km hike and takes around 50 minutes to reach the start. There’s nothing strenuous at all and it’s pretty much downhill all the way. However if you’re really scared of heights, I would suggest you sit this one out.

Getting There
Things To Do

Enjoy the scenic views and stop to read the signs and learn the interesting history.

Make sure you carry plenty of water, there is a water station at the beginning, but nothing along the route until you reach the end where there are a couple of bars at the top of the hill near the train station with nice cold beer and some tapas.

Click here to Explore More of Spain in 360Âº

Have you walked the Caminito Del Rey? Did you like it? Did you have a favourite part?