Enjoy a 360º virtual tour of Perranporth one of Cornwall’s best known and most popular beaches. Boasting an enormous expanse of golden sand, great surf, hundreds of rockpools, caves and Chapel Rock in the middle of the beach with its small natural tidal bathing pool.

At low tide the beach is huge, It can get very busy on the town end, but there’s always room further along the beach in front of the dunes. There is even a pub literally on the beach, the Watering Hole, here you can enjoy a pint and food all day. The atmosphere is very relaxed and welcoming. Usually there is live live music in the evenings, but the last time I was there strangely their wasn’t for a Saturday night. It’s also a great place to sit and watch the sunset. We usually buy ourselves a takeaway and then enjoy it while sat on the dunes watching the sun go down. There are plenty of bins around to discard of your rubbish. We didn’t think to check the tides before arriving as we came from town using the shortcut and the tide was ankle deep over the bridge, so we had to wade through to get to the beach. Thankfully the water wasn’t cold.

When we’d had enough or were cold we all head into the pub, even without music it still had a good atmosphere. Saturday nights The Watering Hole closes at midnight. As we left walking back toward the road using our phones for a torch as there are no lights, to our surprise there were quite a few fireflies amongst the grass along the path, something I had never seen before in the UK.

In 2019 we were near Newquay at Quintrell Downs and had arranged a taxi minibus to drop us off and pick us up as there were 13 of us. This turned out to be a mistake as taxis in Newquay (maybe even Cornwall) are some of the most expensive I have ever experienced and I’d go as far as saying the most expensive taxi in the world!! We were picked up at Trethiggey Holiday Park and driven to Perranporth beach next to Percy Davy Close which was a distance of 9 miles and should’ve taken 16 minutes, but this taxi took us 25 minutes. The taxi we used was A2B Taxis and while on the phone we were quoted £3 or £4 per person with return for 13 people. However it wasn’t A2B that turned up, a taxi called Pat’s Cabs picked us up. Before we got in the driver asked to confirm where we were going. Once we were all in the minibus and travelling on route he then asked how many of us were there, we said 13 of us and he then responded with that’ll be £130 then!!!!!! £10 each, £5 per person for each way. WTF, we aren’t doing an airport run to Heathrow ffs!! He said some excuse of they got the destination mixed up on the phone, which is a likely story. To make things worse he wanted the whole £130 bill up front. We then argued this, as we would have no guarantee that he would even come back to pick us up later as he would already have had all our money and therefore could do a runner. He wrote us a receipt and signed it as proof, but still insisted on the full fare there and then. We basically had to trust that this dude would return at the agreed place and time which Thankfully he did, midnight on the dot, but needless to say none of us were happy with the service and all felt that we had been totally ripped off. I expected the bill to be more around £70 knowing it’s expensive in Cornwall but even then I thought that would be on the extortionate side. 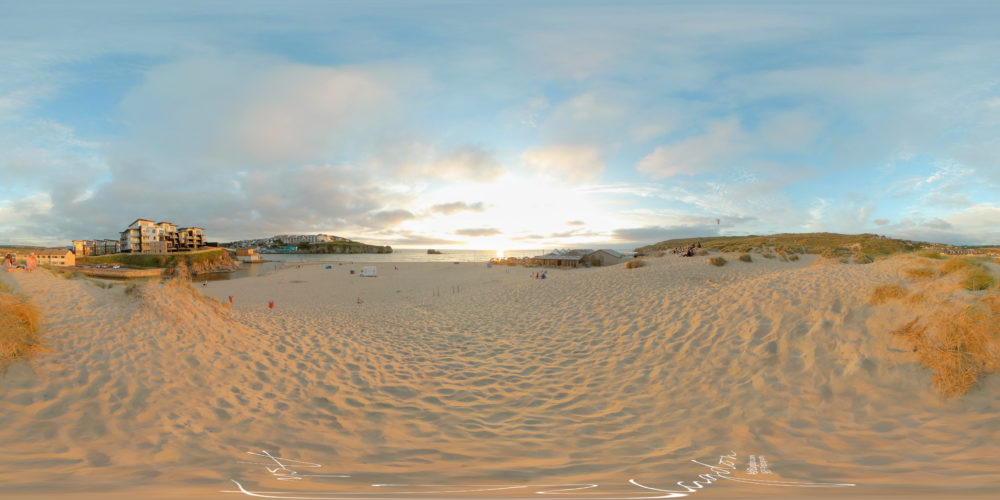 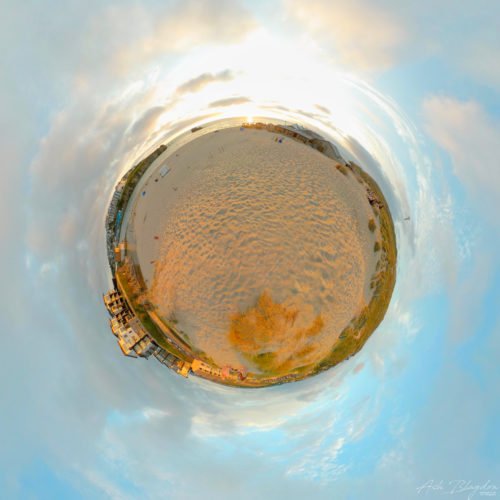 The beach is located on the South West Coastal Path where there is ample walking. The beach extends from Droskyn Point to Penhale Point, just over 2 miles. The stretch towards Penhale is backed by a dune system that includes St Piran’s Cross and the ruins of an ancient church. These dunes are also home to an array of wildlife from, lizards to butterflies. There’s are two rivers that flow onto the beach. Another really nice feature is the famous rock pool in the centre of the beach. You can only experience the rock pool during low tide. During high tide the whole area is floated by the ocean and invisible for its visitors. When the rock pool is exposed, it provides the perfect opportunity for kids to play around in the shallow clear waters and explore some marine life.

The town’s modern name comes from Porth Peran, the Cornish for the cove of Saint Piran, the patron saint of Cornwall. He founded St Piran’s Oratory on Penhale Sands near Perranporth in the 7th century. Buried under sand for many centuries, it was unearthed in the 19th century.

Zoning is in place for water sports.

Several restaurants and pubs are located around the beach. Prices range from rather high to customary, depending on location and quality.

Access is easy. There is a disabled beach wheelchair available

Perranporth TR6 0DR. There is a large car park about as close to the sand as you can get. This makes it pretty convenient for just parking up the car and spilling out onto the beach.

Have you been to Perranporth Beach? What did you think? Would you recommend this beach?