Skip to content
Insta360 Go in Depth Hands On Review

Insta360 GO in Depth Hands On Review. Everything you need to know about the Insta360 GO, the world’s smallest stabilised camera. I will be constantly adding to this post all of my experience and of course share with you all the tips I pick up along the way.

The Insta360 GO is the world’s smallest stabilised camera and insta360 first a non-360 camera. Roughly the size of an AA battery, it’s super-light and weighs a mere 20g. Here’s the official Insta360 launch video;

My favourite mount is the necklace. This has a metal disc attached to an adjustable lanyard that you wear beneath your clothes and stick the camera to on the outside. It doesn’t work too well with thick coats and jumpers but for T-shirts and shirts it’s a great casual mounting option and attaches pretty sturdily, too.

There are also a couple of adhesive mounts included – one a mini stand, the other a rubberised reusable sticky plate and a belt/hat clip that’s best used if you want to wear the camera for some vigorous activity like cycling or running. 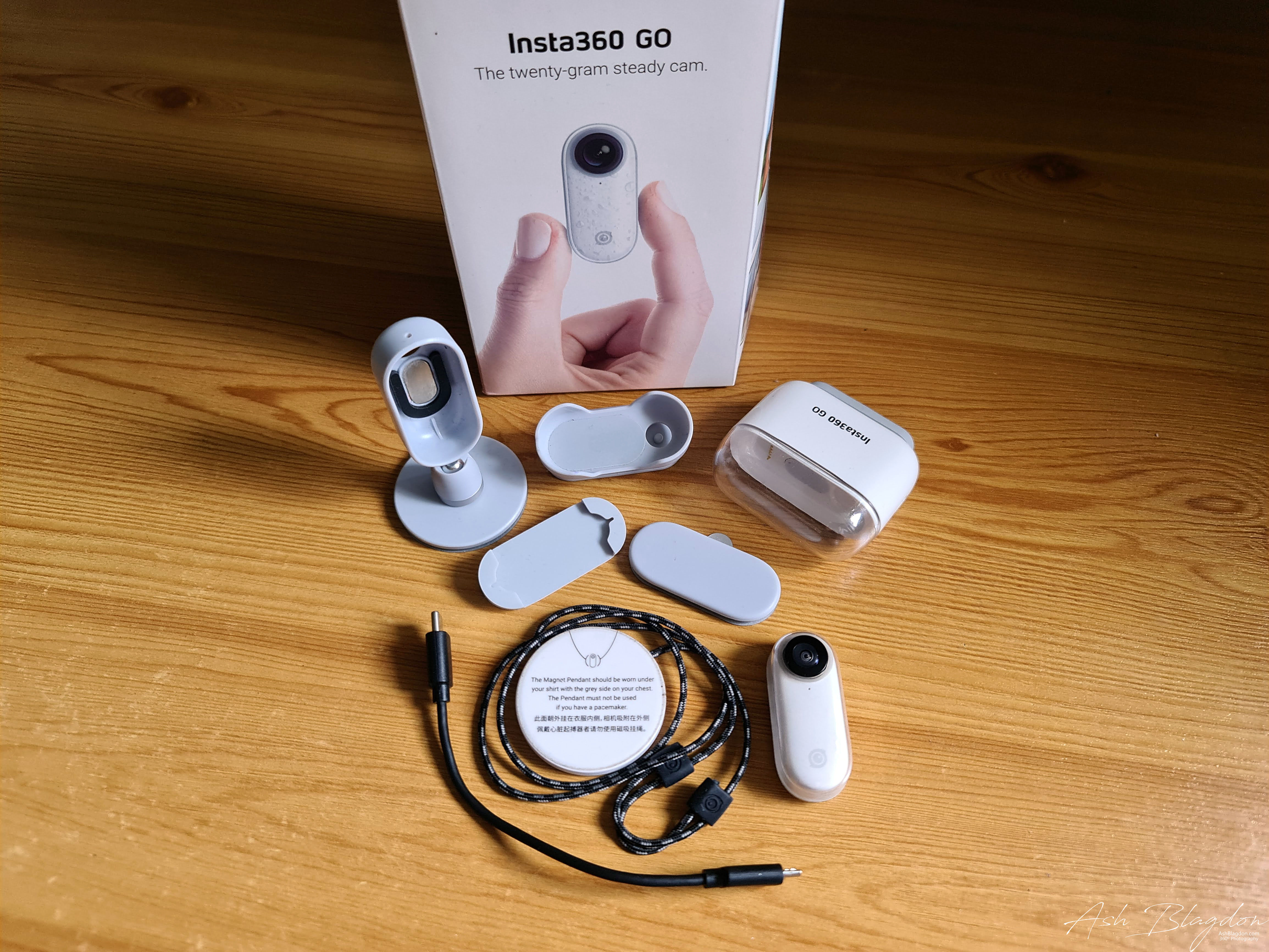 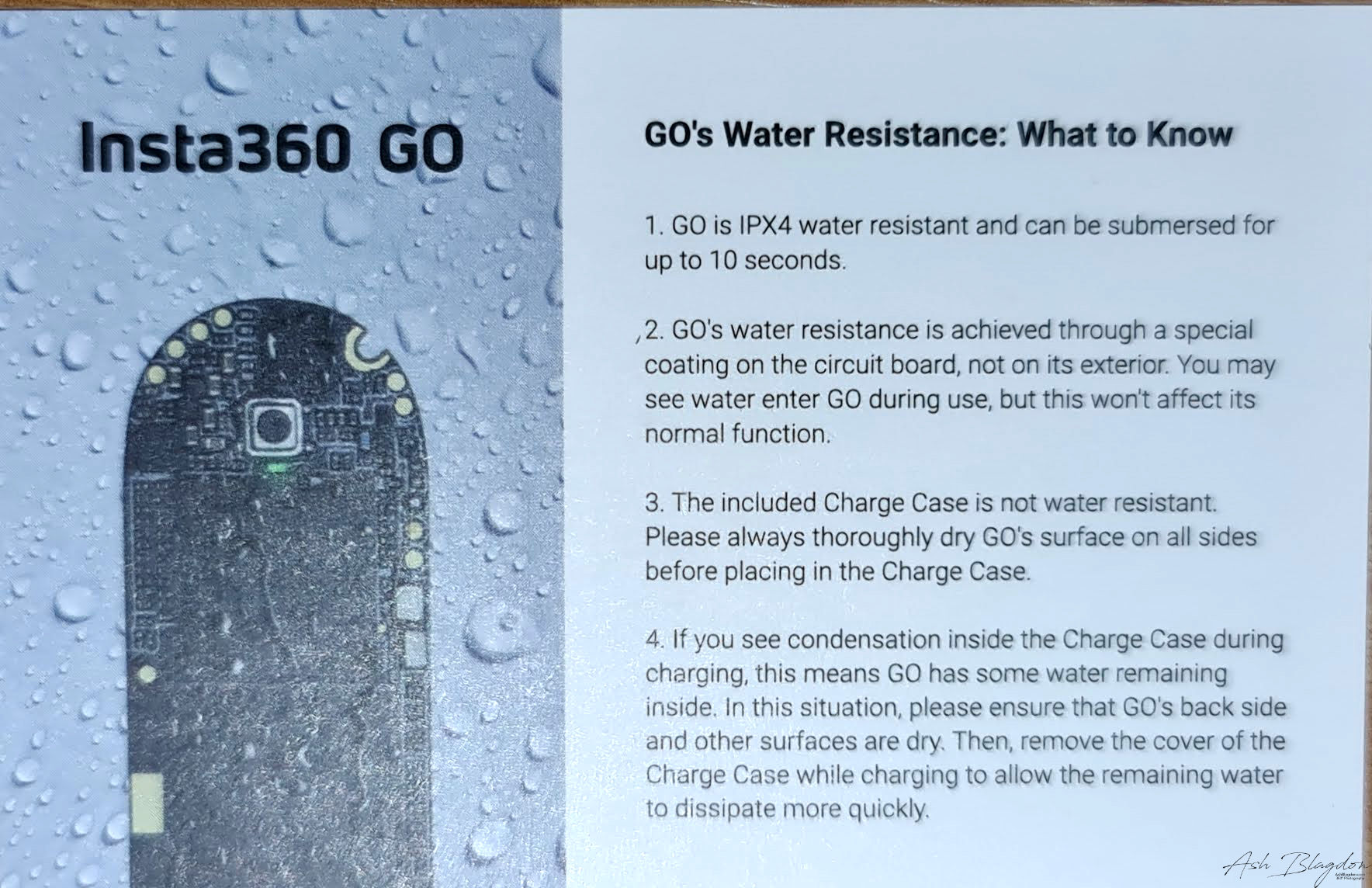 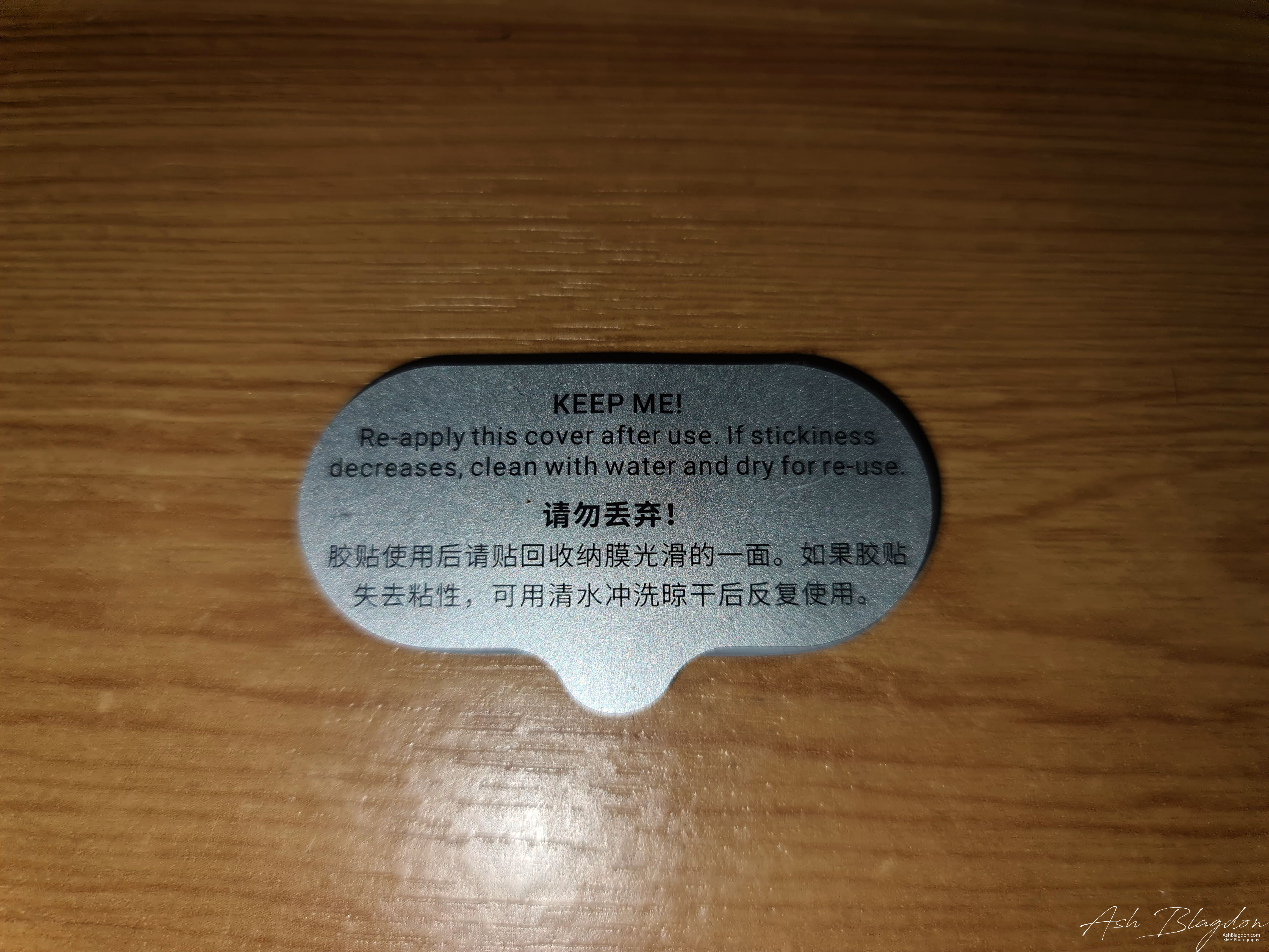 The Insta360 Go is absolutely tiny –  thinner and shorter than my thumb – It has a magnetic rear and a range of clever mounts supplied in the box, you can mount the camera in all sorts of places and barely be aware it’s there.

To turn the camera on just press the logo on the front bottom of the camera. The Go’s button is actually on the back, but a simple press on the front and it will still turn on as long as it has a firm surface in behind.

There’s no Wifi connection as with more expensive cameras, instead you have to plug the thing in physically, either via the micro USB socket on the side for Android handsets or the stubby lightning connector on the base of the case for iPhone.

It’s rated at IPX4, this means it can handle a splash or a quick dunk up to 10 seconds, but certainly not underwater shooting. 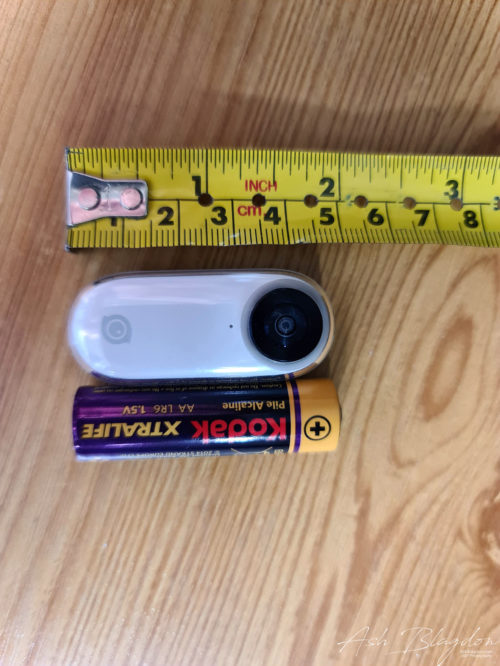 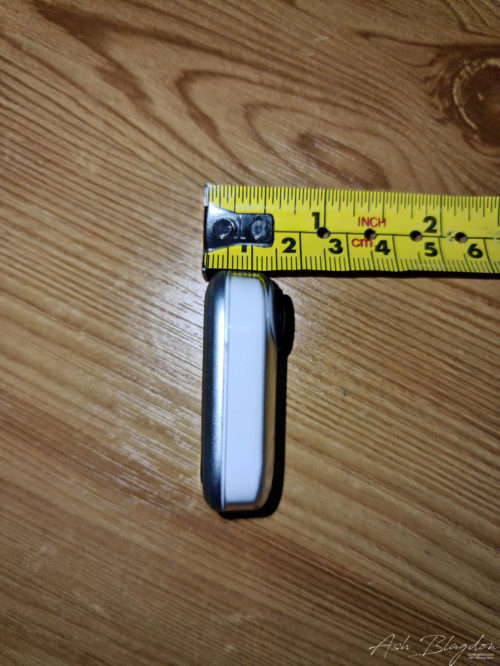 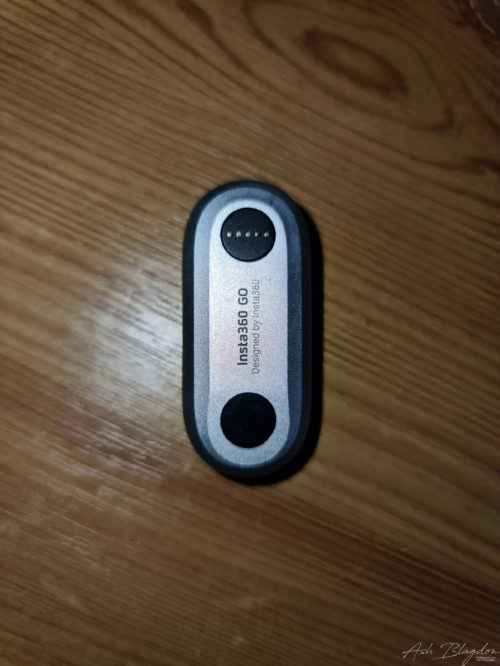 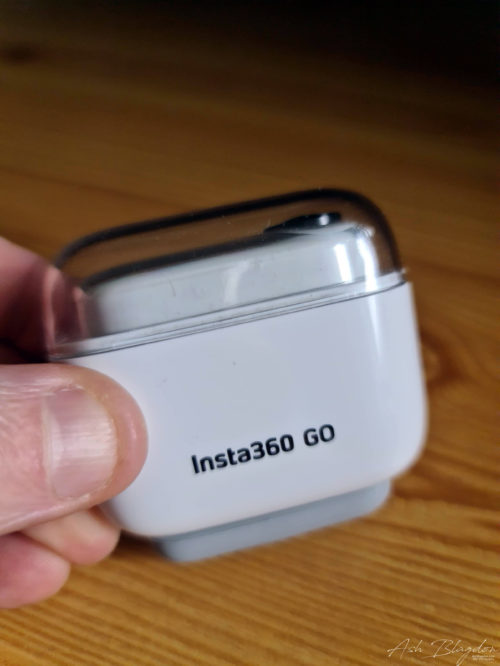 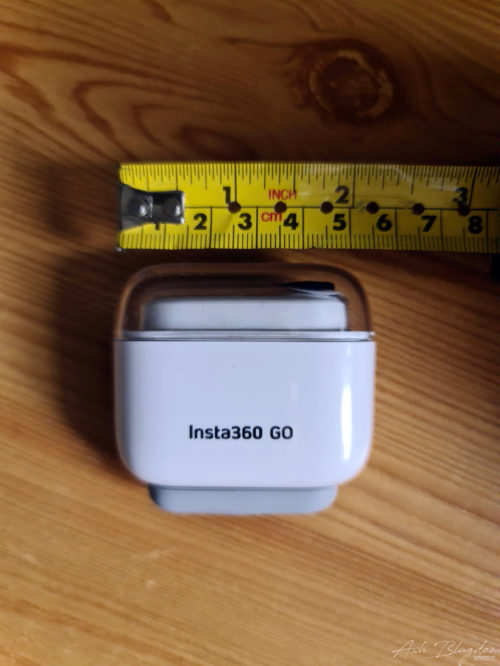 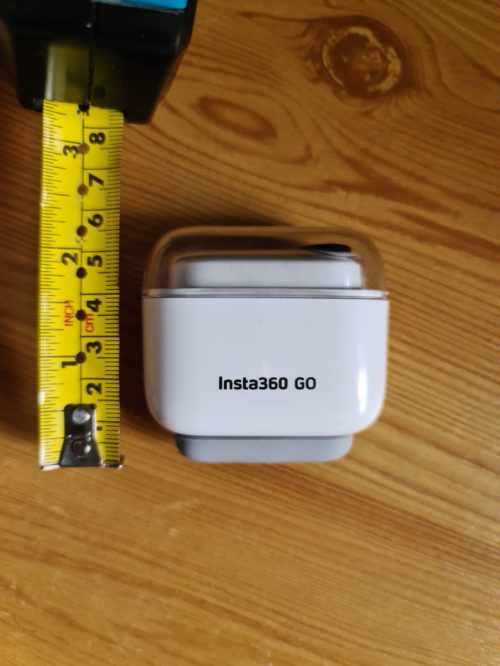 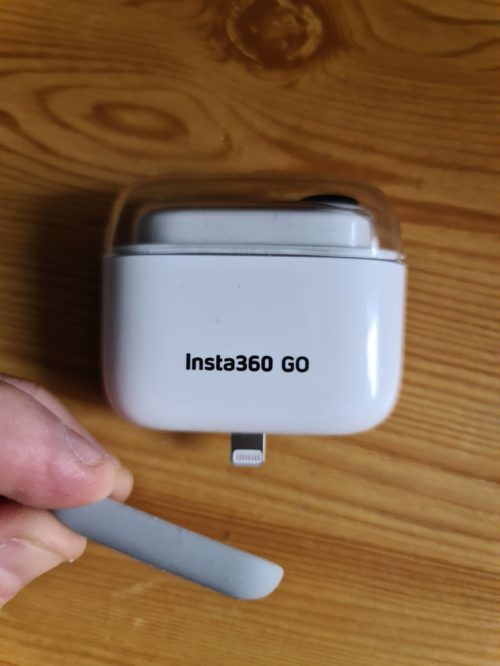 Before you shoot anything, make sure you’ve calibrated the camera first. Settings > Gyro Calibration. Place the Go on a level surface and follow the on screen instructions. A green light will indicate the calibration is complete.

Here we meet the first of the Insta360 Go’s limitations. It’s made to shoot 15s, 30s, 1 min and 5 minute video clips, not capture a whole off-road bike ride that you edit down afterwards. It can’t do that job, and the only longer forms of capture it can manage are time-lapse and hyperlapse. The Go is designed to capture highlights, so they assume it will be at least a few more minutes before you record another highlight. GO videos will be auto-transferred via the companion app in 1080p25 Full HD resolution, and photos in up to 2560 x 2560. The internal 8GB will store about 100 15-second video clips between each transfer.

Quick capture: with the camera off, press the button once.  By default, this records a video clip.  After the clip is recorded, the camera turns off automatically.

Turn on or off: just hold down the power button for 3 seconds to turn it on or turn it off.

You have some control when just walking around with the camera attached too. Single, double and triple presses set off different modes. You choose which in the companion app.

If you take a photo, the camera will remain on.  If you record a video or hyperlapse, the Go will turn itself off after recording, vibrating as it does so.

In addition to the on-camera controls, you can also have additional controls using wireless control.  Turn on the camera, launch the app, tap on the camera icon, and tap on Bluetooth control.  This will make additional shooting modes available, such as static time lapse and interval video.  However the Bluetooth control is limited, you don’t get a preview image of the camera view and you can still only review your pics and videos by plugging the Go into the charge dock, and then plugging that into your phone.

The camera responds to each command with a short vibration (letting you know that recording has started), followed by a long vibration when recording stops. A small light on the front of the camera blinks to let you – and others – know that it’s recording.

FlowState is easily the best part of the Insta360 Go’s footage, this is electronic stabilisation by using a 6-axis gyroscope. Still not as good as a 360 camera though.

Here’s a video from my day using the Insta360 Go at Thorpe Park and a hyperlapse walk to Thatcher Point a famous landmark in Torquay.

The Insta360 Go’s battery seems to drop fairly quickly when experimenting with a few different modes. I’d recommend taking the battery case with you if you’ll be out shooting for more than couple of hours. The battery is good for only around 25 videos of 30 seconds each. Then you have to recharge it, which takes 18 minutes.

One of the best things about Insta360 cameras is the editing tools in its smartphone apps and that continues with the Go. Once you download a video to your smartphone, you can adjust its speed (2x, 4x, 6x, 8x and 16x), apply filters, adjust lighting, contrast and more, and add a soundtrack. The new auto stories themes and the ‘Flash cut’ can come up with some impressive looking stuff that’s great for quick social uploads and the like.

Here is a tutorial for Insta360 Go, showing how you can edit videos with the mobile app. With the Go in the charging case, use the included Micro USB cable to connect the charging case to your PC or Mac.  You’ll be able to copy the Go’s files, which are in .insp (photo) or .insv (video) format, to your hard drive.  From there, you can use Insta360 Studio or Adobe Premiere CC (with the Insta360 plugin) to view the files.  With Studio, you can stitch the files, change the aspect ratio, or adjust the video speed.  However, Studio cannot apply keyframing to the Go’s videos.

There are two ways you can update the firmware.

The Insta360 Go is an action camera for the influencer generation. It’s incredibly light, easy to use and makes harsh movement look smooth with incredible stabilisation. Although, the stabilisation is not as good as that of a 360 camera. The small sensor limitations become obvious when the lighting isn’t great. However, if you mostly shoot in good lighting and happy with 30-second clips, you’ll find the Insta360 Go surprisingly capable.

Even after a few days of using the camera, I still had trouble remembering what each button press did. At times I had trouble connecting the camera to my phone and wasn’t sure if the camera was on or recording. The Go was filled with short 1- and 2-second videos of nothing but me staring at the camera, wondering if it was recording.

Be very careful with the stand, it is only a plastic thread and mine seems to have come cross threaded. I haven’t been able to use it once as the thing won’t screw onto the base straight and keeps cross threading. I’ve given up as if i force it it just damages the weak plastic thread even more, either way it’s useless to me and a very poor design flaw.

I feel it’s a good camera for casual shooters and used for social media, especially Instagram Stories and Facebook Stories. It is definitely not a substitute for either a 360 camera nor an action camera because it cannot capture a 3rd person view and it’s not sufficiently rugged and has limited recording capacity. It’s a great camera for capturing candid shots.

Do you own the Insta360 GO? Do you have any tips to share? Have you encountered any problems? Would you recommend it?