The historical city of Chiang Mai is Thailand’s second largest city and still preserves some of the atmosphere of an ancient village alongside its modern urban charm. Be sure to plan extra time here! Lots of people, myself included, plan to stay for just a few days and end up wanting to stay for more! I loved the city, full of culture, friendly locals, incredible food markets, dozens of beautiful temples, a relaxed vibe and beautiful landscapes.

I was only here for 4 days and like I said above, it’s just not long enough. You don’t realise all the things that can be seen and done here until you’re actually here. You can spend days just visiting temples alone as there’s over 300 scattered all around the city from newly built still with the the clear plastic wrapping on the statues, the big lavish like Wat Phra Singh to the old ruins of Chedi Luang, they all have there own character and something different about them.

Without a shadow of doubt my favourite thing to do while i was here was mud bathing with elephants, I was lucky that there were 2 babies at the time to. It should be number one on everyone’s bucket list while your in Chiang Mai. If like me you like to go off the beaten track and explore the more rural areas then head to Huay Tung Tao Lake. Very few tourists know about this place and yet it’s somewhere all the locals like to chill and hang out. This also shows with the price of food and drink, a big Chang only costing 65 THB, now that’s a bargain.

Lookout For The Awesome Street Art

While you wander the streets keep a lookout for all the awesome street art. You’ll also find plenty of drinks carts which are a welcome sight as you can only drink so much water before it gets boring, they have loads of flavours to choose from to.

If your after a great breakfast then you have to go to Blue Diamond. This place has the best selection I came across and was the only place I went to twice. All fresh produce, veggie or gluten free options available. They bake everything on site so it’s all fresh out the oven and the drinks selection fresh fruit smoothies or alcoholic are fantastic. I tried the goji berry juice and it was the bomb. We also found a little place called Cat House hidden away just off the main street, it’s only small, but the food was excellent.

If you fancy a night out with some live music then I can recommend heading down around Zoe in Yellow night club, its in a little square area with numerous bars and restaurants where you can enjoy a meal and then choose from rock, reggae or dance bars. I only spent one night out drinking here in Chiang Mai, so unfortunately didn’t get to fully explore the night life. 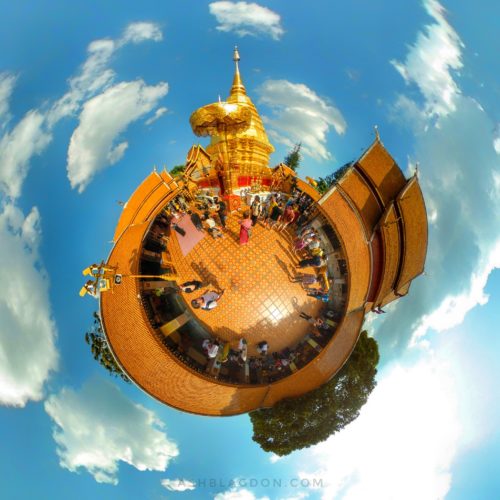 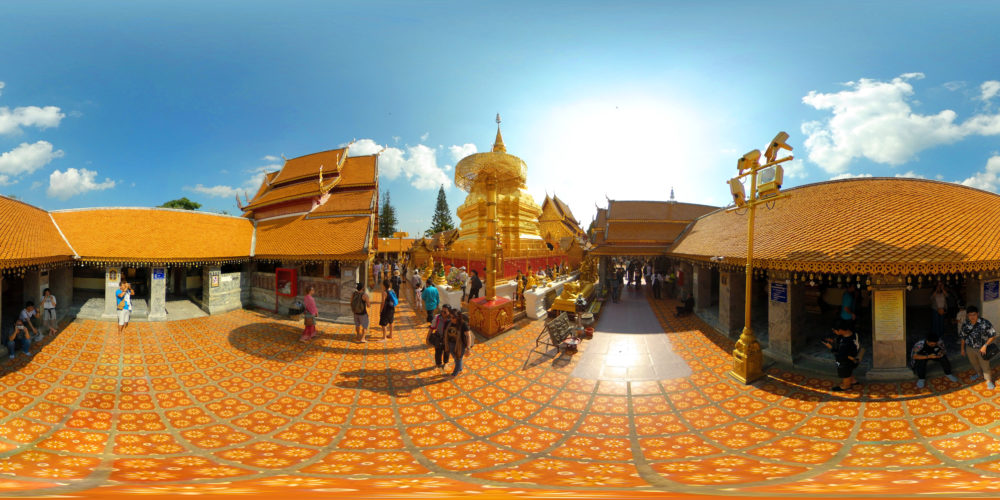 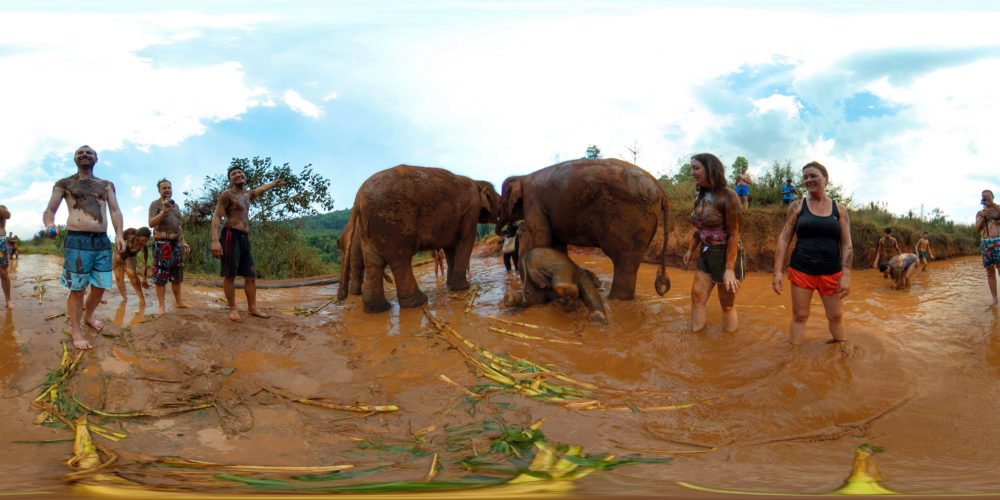 Chiang Mai means “new city” because it succeeded Chiang Rai as the new Capital of the Lanna region. Located 700 km (435 miles) north of Bangkok in a verdant valley on the banks of the Ping River, Chiang Mai was founded in 1296 as the capital of the ancient Lanna Kingdom by the King Mengrai.

The city is also famous for trekking, with its national parks (the Doi Inthanon Park for example, which is the highest mountain of Thailand ).

Where as most of Bangkok’s temples date from the Rattanakosin era that started in 1782, many of Chiang Mai’s temples are much older dating back as far as the 13th century. The oldest temple is the Wat Chiang Man located within the old walled city. This temple was the first to be built after the founding of the city in 1296.

The city has a square wall surrounding it and this was to defend against the nearby Burmese armies and some of the Mongol Empire.

The emblem of the city is the stupa of the temple Wat Doi Suthep, with clouds below to represent the moderate mountain climate of the Northern Thailand. As often, there is also a Naga, the mythical snake, who is known as the source of the Ping river.

Chiang Mai is quite a large place, with a lot of choice. I stayed with a group of friends at Hotel Centro CNX which was very nice, but if your travelling alone its best to stay in a hostel or guest house. They will usually have breakfast included whereas hotel rarely do.

Hostel start around 100 THB for a large 10 person dorm room. Smaller dorm rooms (6 people) start at around 120 THB. The more popular, centrally located hostels (most of which include free breakfast and with air-conditioning) are around 300 THB for a 4-6 bed dorm room. Private rooms at these same type of hostels start at 800 THB, but can be found throughout the city for as low as 350 THB for a double room with an ensuite throughout the city. Guesthouses are also an option and start around 200 THB per night.

Airbnb, you can find a good number of shared rooms in apartments for 350 THB. There’s also a wide selection of entire apartments or homes ranging from 1,000-1,750 THB per night.

Budget hotel Centrally-located two-star hotels start at 400 THB per night, and go upward from there for a room with free WiFi, hot water, a comfy bed, and air conditioning.

Rabeang Pasak Tree House Yep stay in a grown-up treehouse, I haven’t stayed here but I thought it looked cool. Though don’t expect aircon, its open-air bathrooms and basic beds. However It is 65km northeast of Chiang Mai, so maybe just a night or 2 to escape.

Uber or Grab are the easiest ways of getting around. You know how much it’ll cost and they’ll always take you the most direct route hassle free.

Big Red Taxi (Songthaew) It’s rare to find a metered taxi here instead you’ll see the big red taxis everywhere. 30 THB per person to anywhere within the city. If you want to head further outside the city bounds drivers are happy to hire out the whole vehicle for charter trips for a higher price. The drivers will happily take you to a destination, sit and wait for you, then drop you back to wherever you like.

TukTuk I was told to avoid these because of the scam issues, but I like to make decisions on my own experiences and there not as bad as I was led to believe. As long as you show them where you want to go, a few times i used google maps on my phone and agree a fee before getting in, I had no problems.

Moped from 150B per day. By law, you must wear a helmet, and police frequently set up checkpoints to enforce this. If your caught not wearing a helmet, It’s a 200 THB fine for locals and 400 THB fine for foreigners.

Bicycle You can rent a rickety old bike for 50B a day or 300B per week, just make sure you check it over before you hire, especially the brakes.

Sŏrng·tăa·ou (Minibus) are cheaper and less inclined to rip off passengers compared to tuk tuks (because many Thais use them too), but English can be a problem and routes are not always direct. Riding in a sŏrng·tăa·ou is an excellent way to meet local Thais. 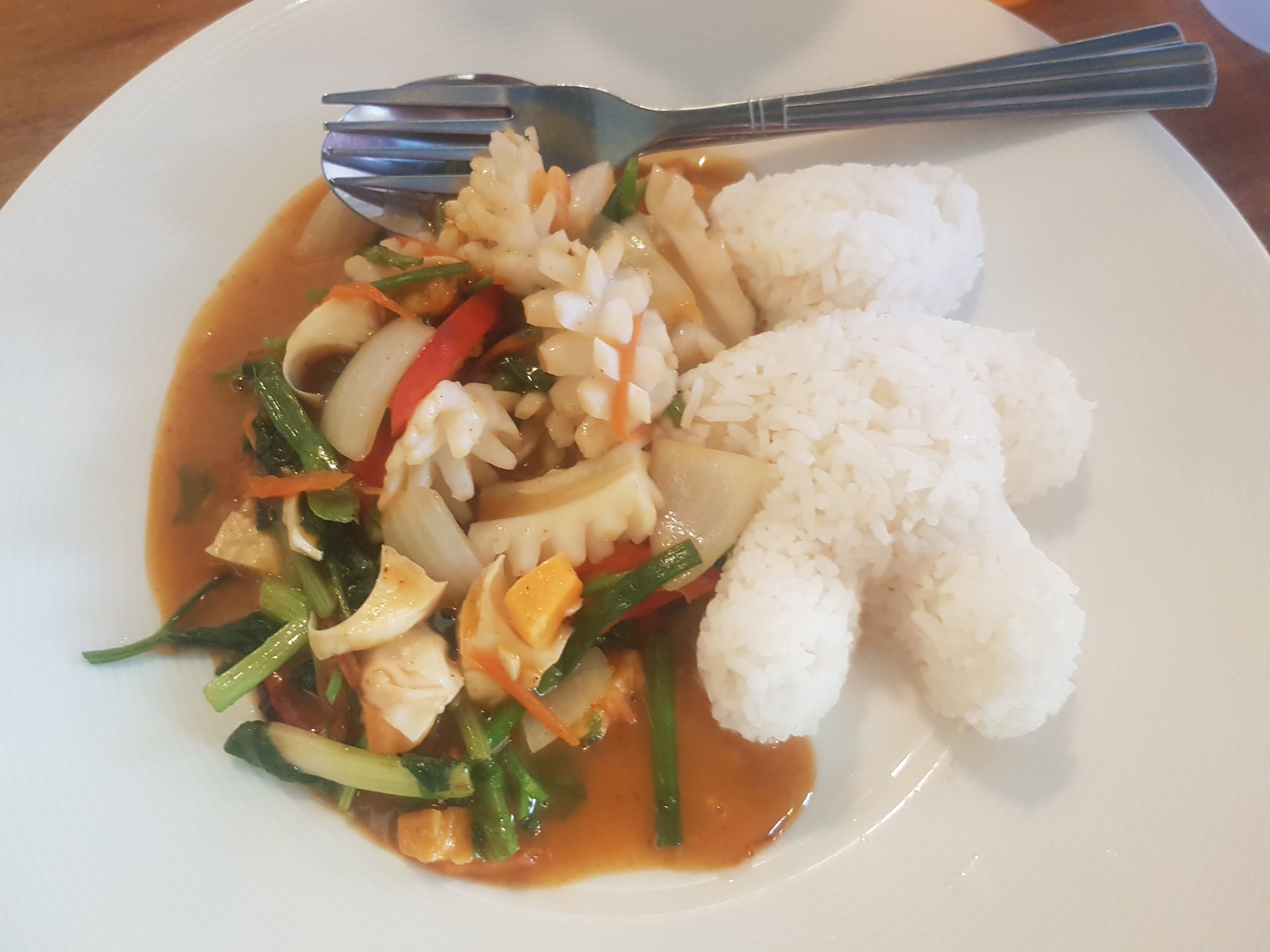 Have you been to Chiang Mai? What was your favourite thing to do? What would you recommend?