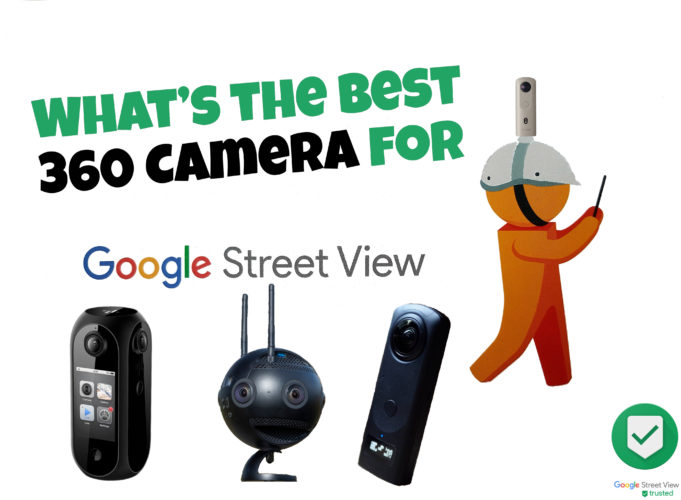 Google Street view was the first interactive 360 experience that went mainstream, it was the first place I saw my first 360 photo. These days it’s hard to imagine a time where I couldn’t explore a random street in London or even Thailand from the comfort of my own home. Now millions of people do just that, so it’s not surprising many are now keen to contribute to this amazing library of 360 images. Thankfully it has now become easier than ever to add your own images to Google Street View and believe it or not you can get started for less than £100.

Don’t believe me? Here’s my Street View profile that has racked up over 17 million views:

The number of  360 cameras around these day has exploded compared to just a year or two, this means there are now loads of options you can choose from. If you want a simple, all in one solution or a 360 camera specifically for uploading to Google street view there are definitely options out there that are better than others. Google has minimum requirements for uploading 360 images onto its street view platform, so you’ll need to make sure you have a camera that meets their standards.

Google have created four categories for the types of cameras it recommends for street view photography:

As I have done with my list of the best & worst 360 Cameras, I will list the cameras starting with the cheapest first working down to the more professional and more expensive. All these cameras work directly with the Google Street view app, so your final choice will probably depend on the price of the camera and the features it has.

The SC2 appears similar to the Ricoh Theta V, with identical photo and video resolution, and is likewise compatible with Theta V plugins. The SC2 does now feature a small LED display that shows the battery level and shooting mode, making it easier to swap modes without the need of a phone. Startup time is faster than the Theta V. The preset modes should help make it very easy to use. The SC2 does not have live streaming and with only 14gb memory shooting 4k you’ll only be able to record a few minutes of footage.

This camera is aimed toward the professional market and does produce some of the best images to date, almost dslr quality from a one shot 360 camera. The new display panel is a great feature, meaning you wont need to be connect to the app to make adjustments. It has Aperture priority which is new for 360 cameras. However, still there is only a measly 19GB of storage and no sd card slot, which is rubbish especially if you shoot video. This is not a video camera, images are it’s priority. With the release of plugins and the 9 bracket hdr shot, you can get near perfect images in under 60 seconds. This capability has helped propel this camera straight to the top of the pile if you want to create virtual tours and are only interested in pictures.

Aimed for the professional use and virtual tours. I like the large screen and it can publish directly to Google from the camera and it’s suitable for untrained personnel.

The Insta360 Pro 2 the latest professional camera from insta360. so if you are just looking for a cheap solution this isn’t the camera for you. If you are looking for professional quality 360 photos that can also be uploaded to Street View then this could be the best all in one solution. The Insta360 Pro 2 can shoot high quality 360 photos with Integrated GPS Module, FlowState – Cinematic Stabilization, Farsight – Long Range Live Monitoring.

The above is a selection based on the overall specs of the camera, the price, value for money and being able to upload straight to street view. There are many other cameras that are also compatible on the Google list.

Personally I don’t think video mode is all it’s cracked up to be as it’s just frame grabs from a 360 video, so the quality is usually poor compared to that of 360 photos. Maybe if your camera has an intervalometer mode would be better.

Even if your camera isn’t on the recognised list by Google don’t worry as truth be told you can actually manually upload any 360 photo from any camera as long as the specs have met the Street View ready requirements. Then using the street view app simply import your 360 photo. The list basically only tells you what cameras allow the street view app to control them, if the camera isn’t on the list then you just can’t control the camera with the street view app. This just makes it harder to create the Google blue line on the map and you can’t upload straight from the camera to the map. To be honest you never want to upload straight to the map without having checked the image first for any faults like an uneven horizon, any chromatic aberrations or correcting exposure levels anyway.

I haven’t used a listed camera for a few years now, the cameras abilities and the photo quality and price I personally think out way the need to easily upload and create blue line on google. Check out what i’m currently using here.

That’s it, I hope you’ve found this guide useful and I’ll be updating this post when any new and better google recognised 360 cameras are released. If you want to see a full list of all available 360 cameras the check out my list of all the best and worst 360 cameras here.

What camera would you recommend for street view?