Enjoy a 360 virtual tour of Railay Beach everybody’s vision of a true paradise, with silky-soft white sand lapped by emerald green water, it’s one of Thailand’s most impressive, atmospheric and beautiful beaches.

Just around the corner from Ao Nang is Railay peninsula, a place I’ve been to twice. Many wrongly think it’s an island when it’s actually part of the mainland. It is not accessible by road because of cliffs and must be reached by boat. The trip takes around 15 minutes from Ao Nang. The peninsula features four beaches, but only two are spectacular, Railay West and Ao Phra Nang. They are everybody’s vision of a true paradise, silky-soft white sand lapped by emerald green water, it’s one of Thailand’s most impressive, atmospheric and beautiful beaches.

Thankfully Railay remains much less-developed than Koh Phi-Phi, but it can still get very crowded, especially after 10am. My first visit we chilled in the water of west beach enjoying the view of the towering limestone karsts that dominate the landscape around us before wandering the island. Second time it became really busy so we decided to walk across to Tonsai, a short 20 minute walk/climb where it’s much quieter and the place all the rock climbers seem to go.

There’s actually quite a few things to explore, so don’t just sit and chill in one spot and miss out on all the things to do. The first thing we stumbled across was The Diamond Cave, about 20 minutes walk from the beach. A boardwalk leads you inside where you can admire stalactites, stalagmites and even a small colony of bats. This small natural wonder is located on Railay East, very close to the Diamond Cave Resort and entrance to the cave is 100 baht per person.

The beach isn’t the only reason everybody comes to Railay, there’s also one of the weirdest and highly unusual activities to do in Ao Nang if not all of Thailand, ‘dick cave’ as we called it, officially it’s known as Phra Nang (Princess) Cave. Why is there a cave, make that two caves full of wooden penises, cocks, manhoods, members, johnsons, peckers, schlongs, trouser snakes, thunderswords, heat-seeking moisture missiles, one-eyed yogurt slingers, purple-helmeted warriors of love? Haha sorry getting carried away, know anymore? Let me know in the comments below. Anyway these mighty phallic towers and other offerings are placed here simply for superstitious purposes. Fishermen, before going out to sea, have made offerings to the symbolic Phallus of Shiva (known as the Siwaleung or Palad Khik in Thai). The fishermen, who say the cave is the home of a mythical sea princess, believe their offerings will bring them success in their fishing, protect them from danger and it’s believed to help with fertility. One of the most bizarre things I think I have ever seen, let’s just say it’s an interesting little piece of culture. Have you been? Let me know your thoughts in the comments below?

I personally thought Phra Nang Beach was better than the famous Railay West and the best beach for swimming, with it’s clean, white powdery sand, crystal clear and shallow water. After some more sunbathing, we grabbed a bite from the floating snack bars and jumped on a longtail back to Ao Nang.

Even though I’ve been here twice there were still a couple things I’d like to have seen, the viewpoint, lagoon, the sunset and nightlife. The main reason we didn’t go to the viewpoint was that we only had flip flops and it’s quite challenging as you have to climb tree roots and dodgy old rope just to get up to the viewpoint. To get to the lagoon is even more treacherous, the trail involves several descents over rocks and challenging obstacles. A pair of closed toe shoes would be advised, as seeing and talking to those that had been that were also covered in mud said the climb isn’t as easy as you’d think. You’ll find the trail to Railay Viewpoint at the southern end of Railay East towards Phra Nang Beach. Did you climb it? Let me know what you thought in the comments?

For food there are quite a few places to choose from, we ate right on Railay West, the vegetarians of the group found a good place called Govinda’s at the beach. With hindsight for the non veggies among us this was a mistake, there are actually more choices the other side on Railay East and as it’s not as busy the prices were a little cheaper to. I expected it to be more expensive anyway as the only way to get here is via boat, a captive audience and all that. There is no swimming on Railay East, it’s just part of a mangrove swamp. Though you could watch the sunrise, if your there at the right time.

So is Railay worth it? Of course it is! Really, in terms of natural setting, Phranang is one of the most beautiful beaches in the world. But I would recommend going slightly outside peak season if you can. 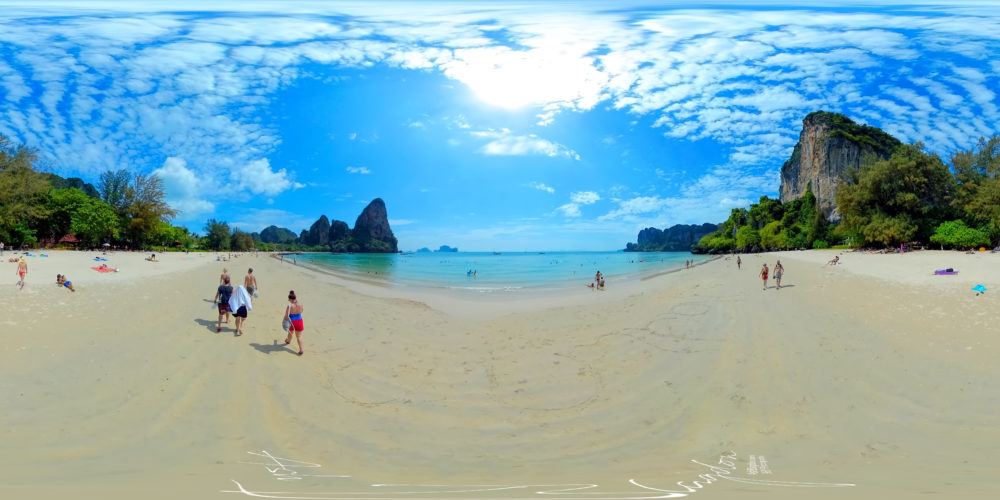 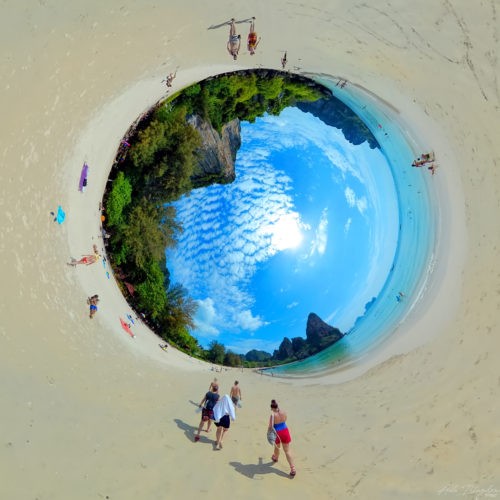 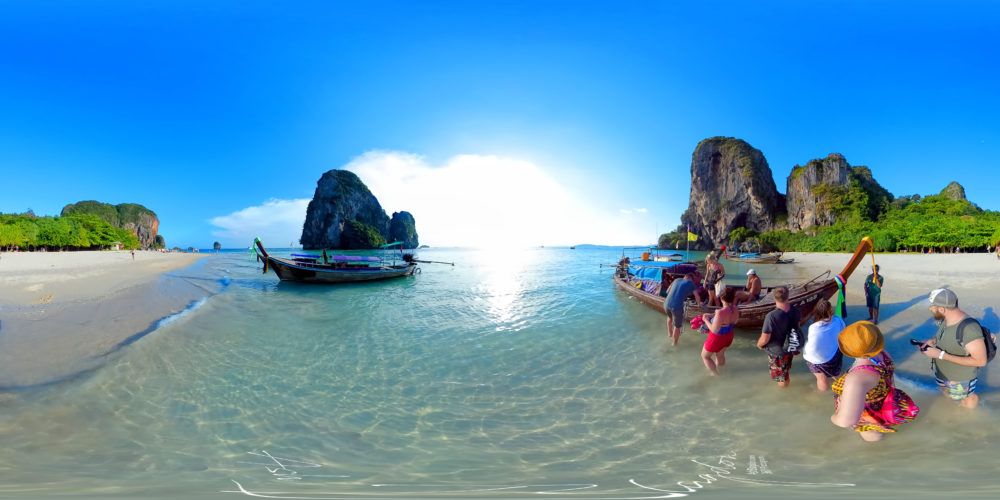 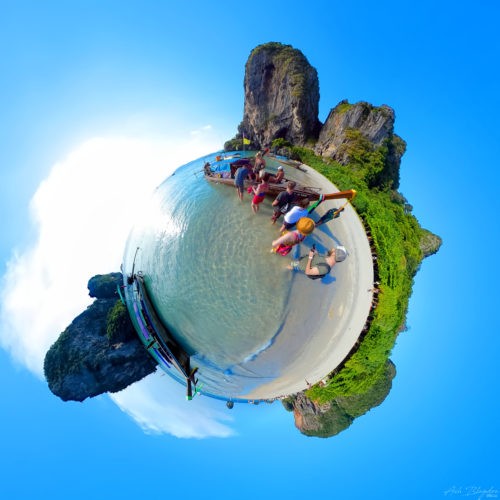 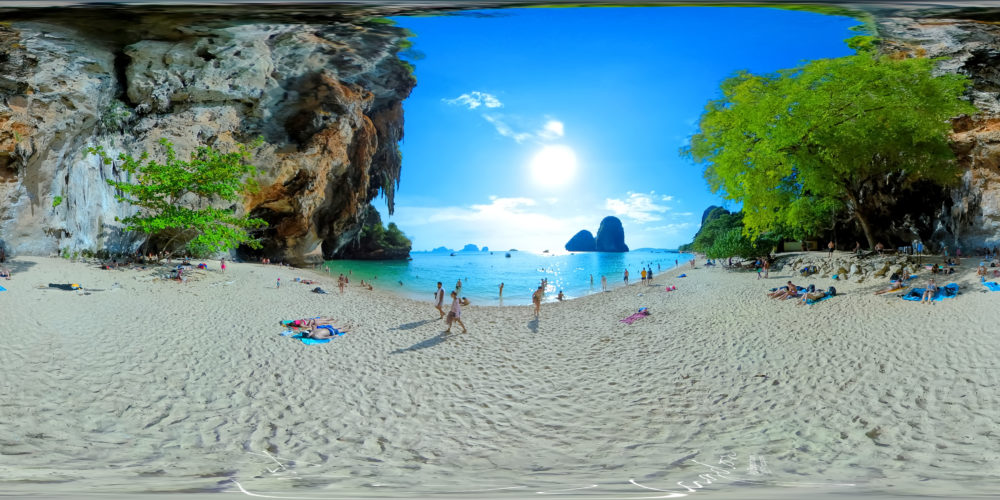 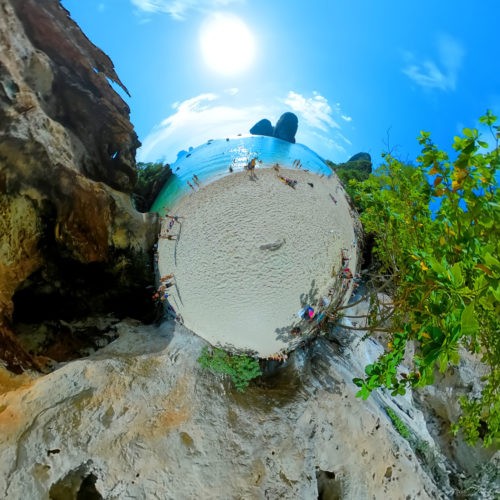 Rai Leh, also commonly known as Railay, is a tourist area on the Andaman Coast of Thailand, in Krabi Province. Rai Leh is primarily known as a rock climbing hotspot, attracting climbers from all over the world to its superb towering limestone. Rai Leh is considered to be all of the peninsula, which has four primary areas, Phra Nang, Rai Leh East, Rai Leh West and Ton Sai.

In 2014 the small village of Tonsai was relocated to make space for a new mega-resort commissioned by the Sheraton.  After relocating the village the hotel chain proceeded to build a concrete wall around their land. Tonsai village that used to sit facing the ocean was forcefully moved and now faces a concrete wall instead. Rumour has it that when the hotel giant bought the land it had only seen pictures of the beach at high tide. Only when construction began did they realise that at low tide the beach is completely covered in sharp and jagged rocks, which potentially prompted them to cancel  construction! Once you’re across Tonsai beach find the path that leads back into the jungle and towards the newly relocated village that once stood on the beach itself. One final detail, you can only get to the village with a low tide and calm seas.

There are no real grocery vendors, so meals are limited to the restaurants, though some small snack items are available in the convenience stores.

It’s a 5-10 minute walk between any of the landmarks, except for Ton Sai, which is a longer hike through the jungle. The village itself is a pedestrian’s dream, as there are no cars, and the uneven bumpy walkways make even bicycles impractical.

As Rai Leh is on the tip of a peninsula surrounded by ocean and blocked by Nang Mountain, access is by boat only. Longtails depart from Ao Nang (10 min) and Krabi Town (30 min) on demand, making those places the gateways to Rai Leh. It’s also possible to reach Rai Leh via regular ferries that run between Ko Lanta, Koh Phi Phi, and Phuket Town (from Rassada Pier).

Have you been to Railay Beach? Where did you go? What was your favourite thing to see or do? Would you recommend it?