Enjoy a virtual tour of Thorpe Park, a great day out for everyone, especially If you like adrenaline, thrill and water rides like me.

I would advise pre booking your tickets to avoid disappointment as only so many can be sold a day with the new restrictions. We came on a Saturday with all the Covid-19 social distancing rules having been implemented and less people allowed to enter we thought perhaps it wouldn’t be as busy. I took a screenshot of my ticket when i bought it, but what i didn’t know was the scanners don’t like dark mode, they asked me to change it to normal white mode, but i couldn’t being a screenshot. Luckily they saw the date and waved me through anyway, but it did hold me up a little.

The rides that weren’t up and running were Tidal Wave, Derren Brown Ghost train and Walking Dead. They have painted circular yellow markers on the floor as you enter each ride, though many of these are already looking faded with the footfall. Hand sanitiser was at each entry and all were full until near the end of the day around 5pm when we got to Swarm the two in the queuing system to the ride were both empty. Throughout the day while queuing, some people obeyed the 2 meter rule but very few actually did. There were regular announcements reminding people to social distance and once you got near the station there was a member of staff waiting to make sure everyone put on their masks before going near the rides. I had no problems with the mask falling off, in fact the forces are in your face, so it actually pushes the mask on tighter. Queue times on average I would say were 45 minutes a ride, there is often a short delay while they stop the rides for cleaning procedures, but this only takes no more than 5 minutes. The longest we queued was near the end of the day for Swarm which was 140 minutes on the board and actually took 2 hours. In the 32ºc heat near the end of the day, that wait pretty much zapped us, so we went on one more ride, Saw and then left. We only just had enough time to do all the coasters and a couple thrill rides once. Saw was the only ride we got to do twice.

Thorpe Park is a great day out with your mates. I’ve been three times now twice out of season on a Thursday and once on a Saturday. I would definitely recommend going during the week if you can and out of season to avoid the worst of the crowds, as the majority of kids have gone back to school. Both times on the Thursday we arrived just after the park opened and we got to go on a number of rides without queuing at all before the park started to get a little busier. The time I came on the Saturday, I was first in the queue waiting for the shutter to rise, managed one ride within 3 minutes of opening and then queued for each ride at least 35 minutes or more for the rest of the day.

On the Thursday the longest that we waited was 40 minutes for Derren Brown’s Ghost train just after lunch, which is a VR ride. I have to say I was a little disappointed and didn’t find it at all scary. They ask to keep it a secret, so I won’t give away any spoilers, but I have since found out that there are over 20 variations, so you won’t have the same story as the person sat next to you. Next time i’m there, if there’s no queue for it, then I would give it another go, but I wouldn’t queue for it again. The ride takes 15 minutes with 50 or so people onboard, so the queue can quickly jump to an hour’s wait.

The new Walking dead ride was sadly the same, a dissapointment. It was a bit stop start and never really gets going. If you like walkthrough story telling then you’ll probably like them both, but I like the adrenaline thrill rides, which is probably why I wasn’t that impressed.

As for my favourite rides that’ll be Saw, Stealth, Swarm and Tidal Wave. The later if you don’t mind getting a little wet. We went on it four times, of which 3 times in a row at the end of the day. I’ve never been so soaked through in my life, I could even feel the water trickling down around my balls 😱. We did try one of the £3 drier machines, but It just made the wetness more of a warm moistness, lucky the sun was still shining though to help dry us off.

Tip: Take a towel and a change of clothes if you plan to go on Tidal Wave.

Ride with me and my friends on the coasters, just pick and choose a tab and remember to adjust the quality settings to 4k for the best experience.

I preferred Thorpe Park to Alton Towers as there’s a lot less walking involved, it’s all squeezed onto an island, so all the rides are within a couple minutes or less of each other. Even from parking the car, you can be on a ride within 5 minutes, unlike Alton where you have a bus journey that can take 20 minutes. We still didn’t manage to go on all the rides, as we did a few more than once, but that just means we’ll have to go again.

It’s a shame like with most theme parks in just about the world there is a ban on selfie sticks which is crucial for hand held 360 photos. I didn’t want to be carrying around a tripod that’s for sure, so I had a fair bit of editing to get rid of my ugly mug and the dreaded big thumb nadir! 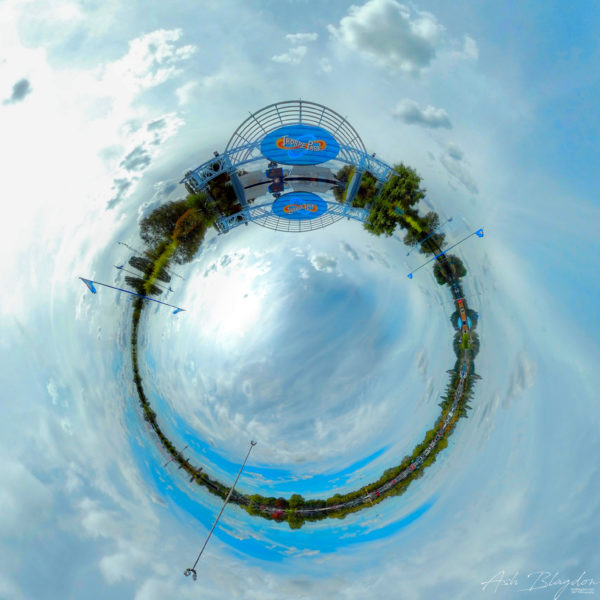 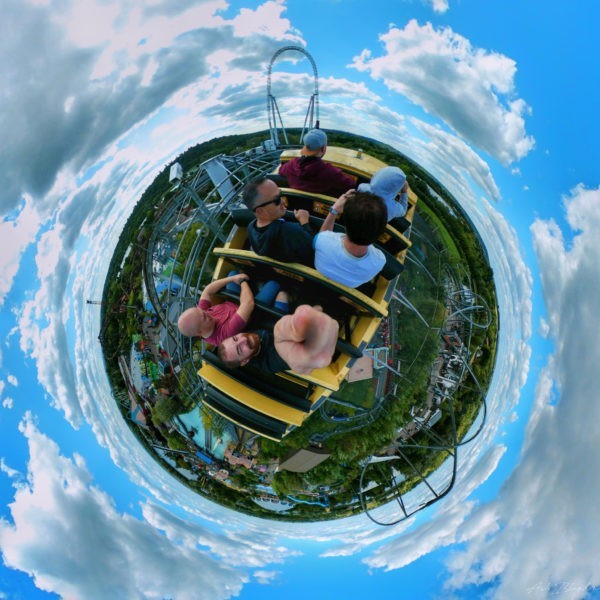 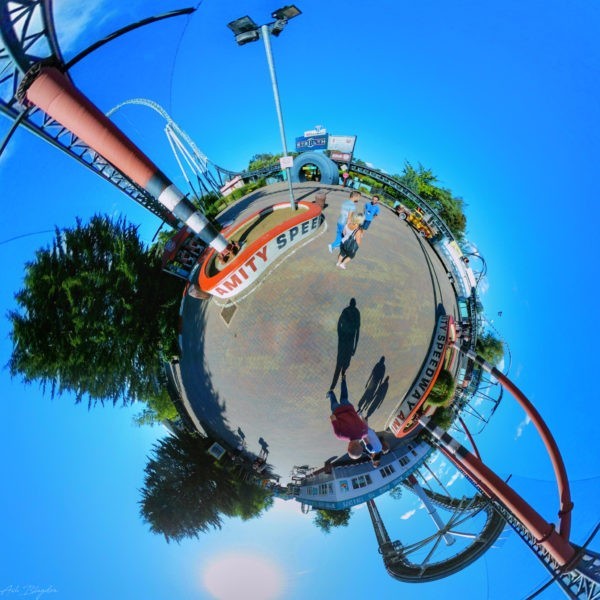 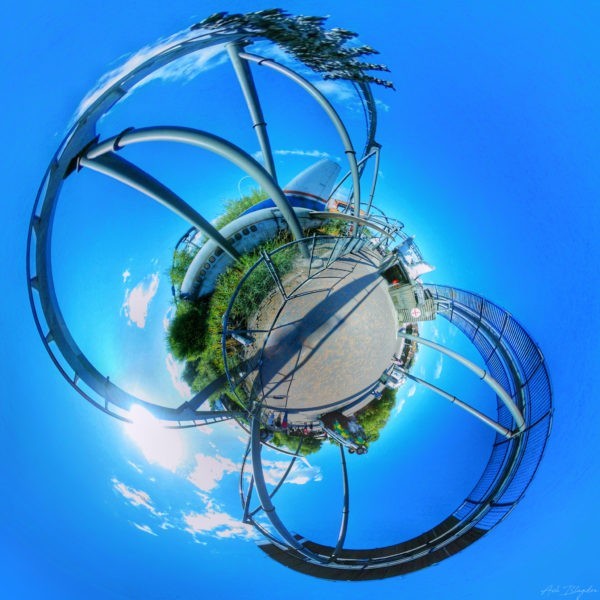 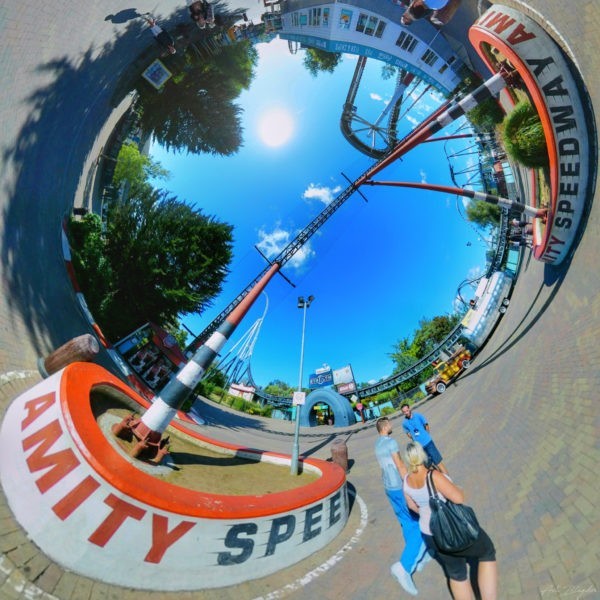 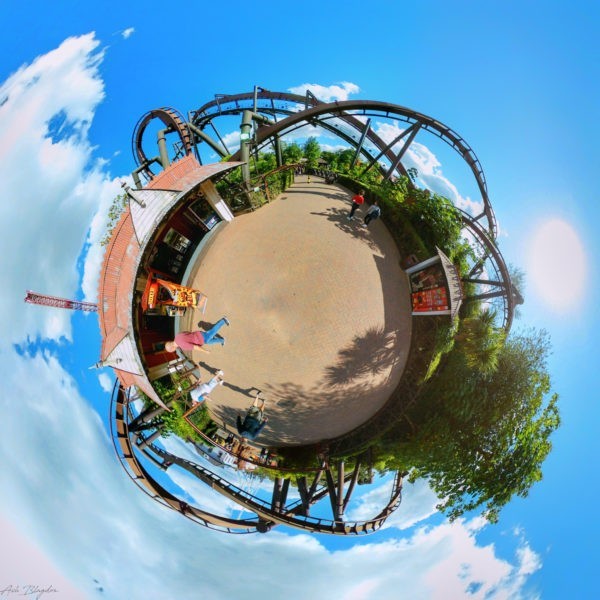 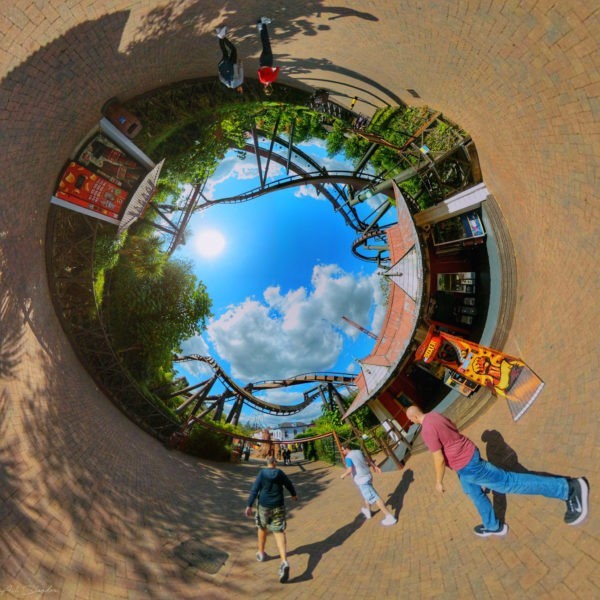 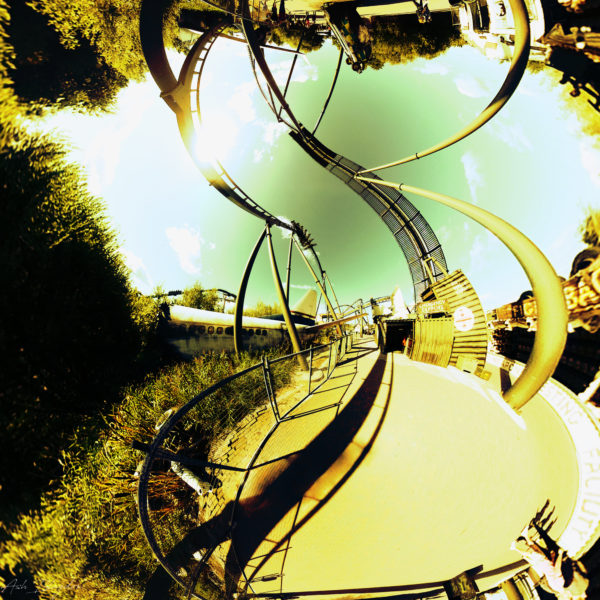 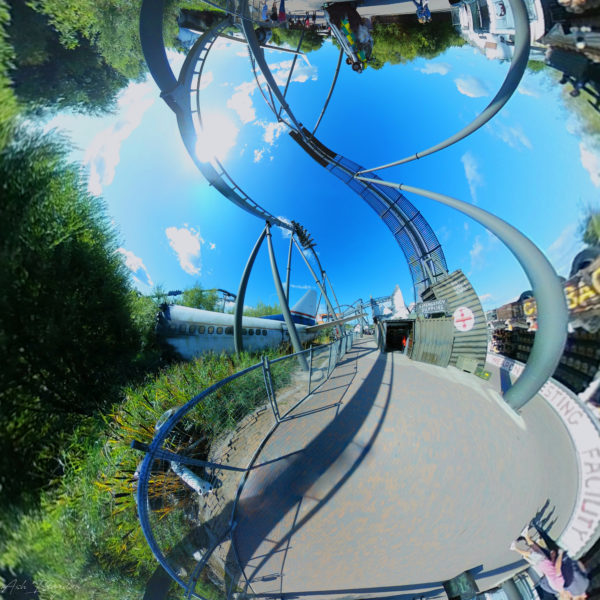 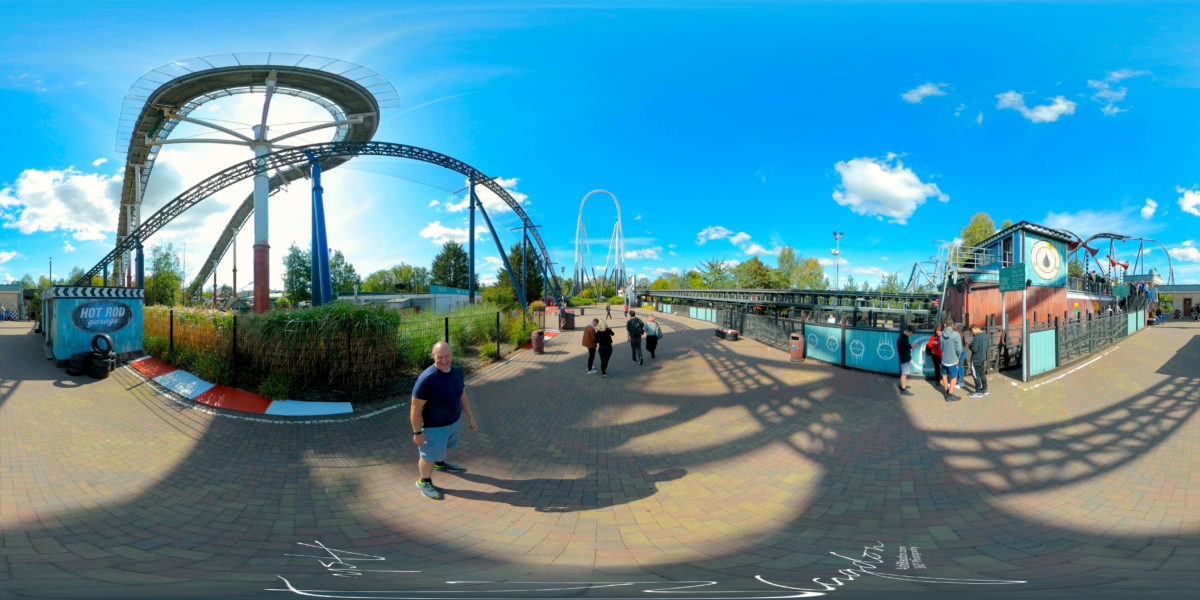 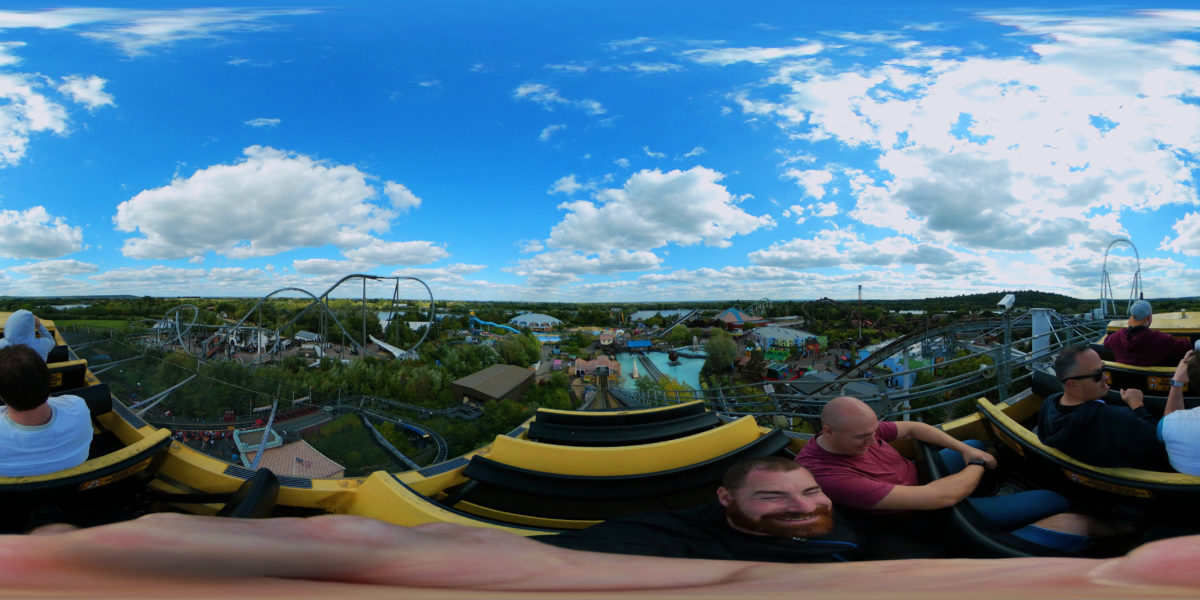 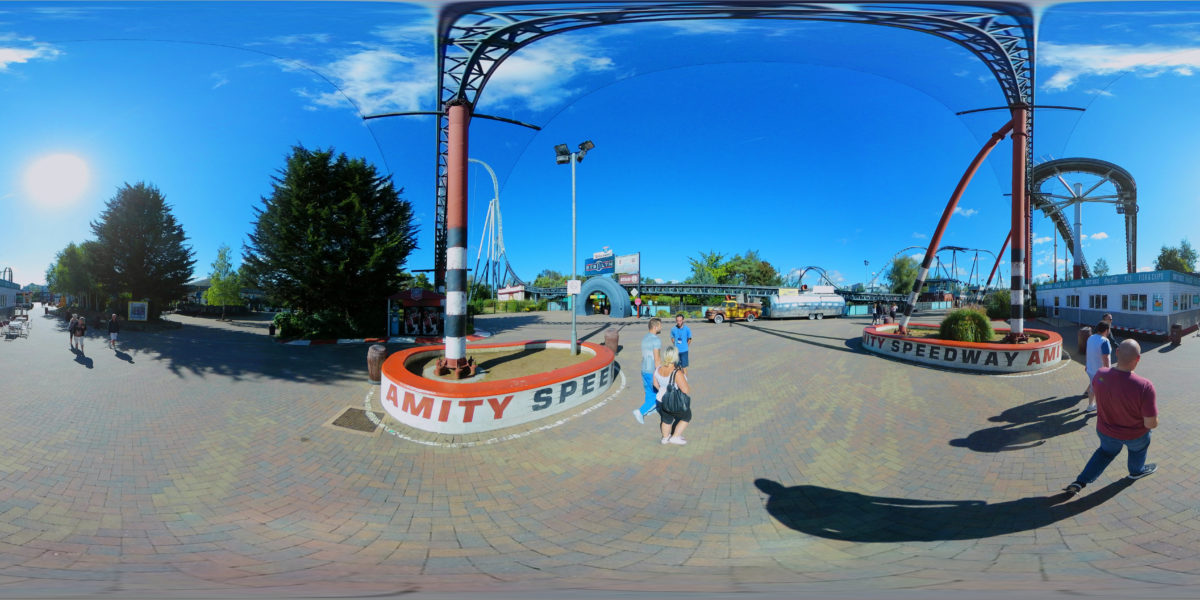 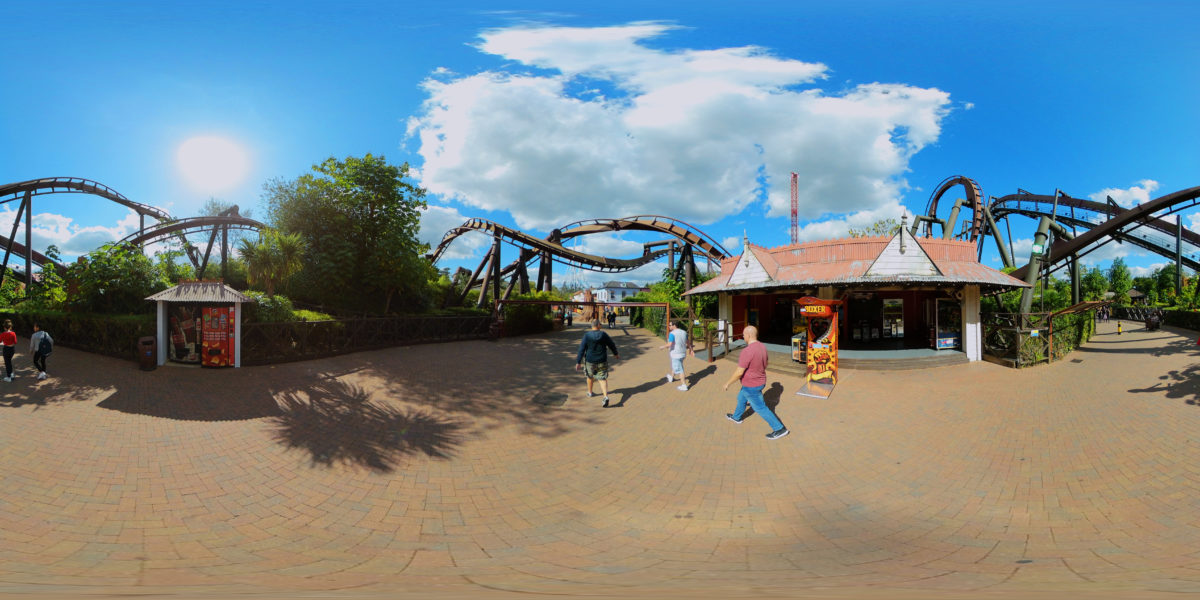 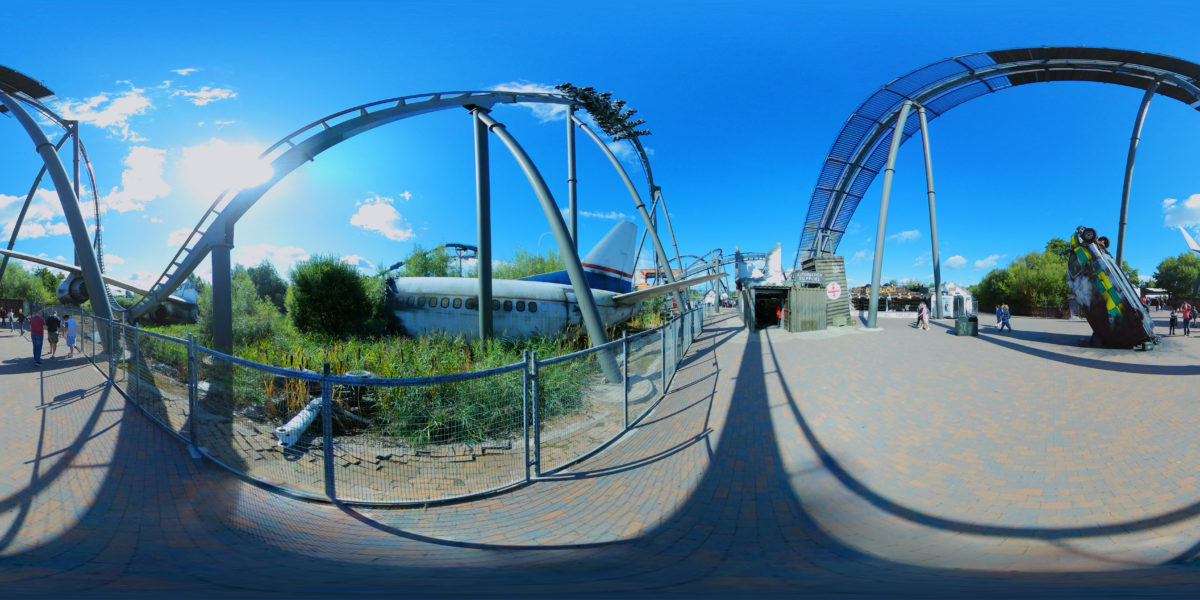 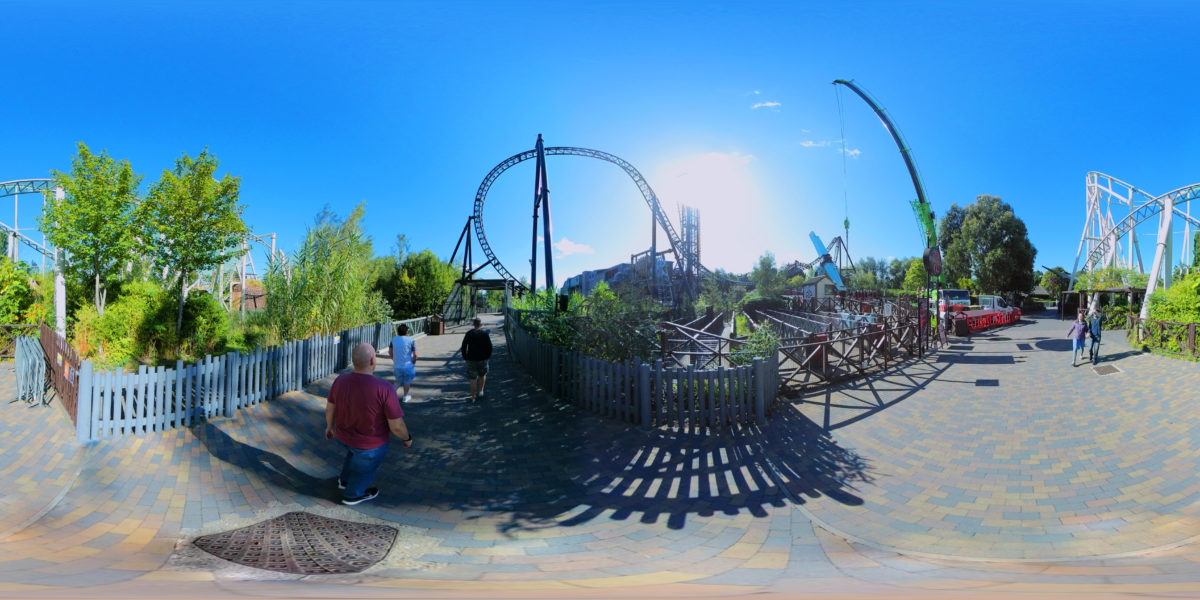 If you don’t live to far away and can make the trip a few times then the season pass would be worth it. Though if your like me and my mates, then simply collect the superday codes from the Sun newspaper to get two free tickets.

Tip: Collect nine codes from The Sun newspaper for The Sun Superdays promo and get two free tickets. Find out more here.

The park always opens at 10am, but the closing time changes depending on the time of year. To be sure click here.

There is an on site hotel the ‘Shark Hotel’ and looks very quirky from the outside, I imagine though you’ll pay heavily for the convenience. As parking and accessibility is so good to the park anyway I would suggest looking for nearby Airbnb or travel lodge.

There are over 30 rides in the park. I was only really interested in the thrill and water rides. I didn’t get to go on all the rides, but those I did i have rated below:

There are restaurants scattered throughout the park serving standard fish ‘n’ chips, hot dogs and burgers. For 2019 there are Coke Freestyle refills throughout the park where you can mix up your own drink from 100+ flavours, but you have to buy a special cup for it to work. If a cold beer is what you’re after then the Huntsmans arms in Old Town is where you want to go, I had a nice cold Camden pale ale, while they also had Magners or Budweiser all on draught.

There are also a few of the big name fast food franchises to choose from:

Getting around is easy as all the rides are squeezed onto an island, they’re only a couple minutes walk apart.

Tip: Download the app, it has real time info for all the ride waiting times.

Staines Rd, Chertsey KT16 8PN. I shared a car with friends travelling up from Devon, which took us around 3 and a half hours. You don’t pay for parking when you arrive. It’s best to pay parking using the app or it’s £10 on the gate when you leave.

Tip: Pay for parking through the app for £7.

Have you been to Thorpe Park? What ride would you recommend? Do you have any tips?